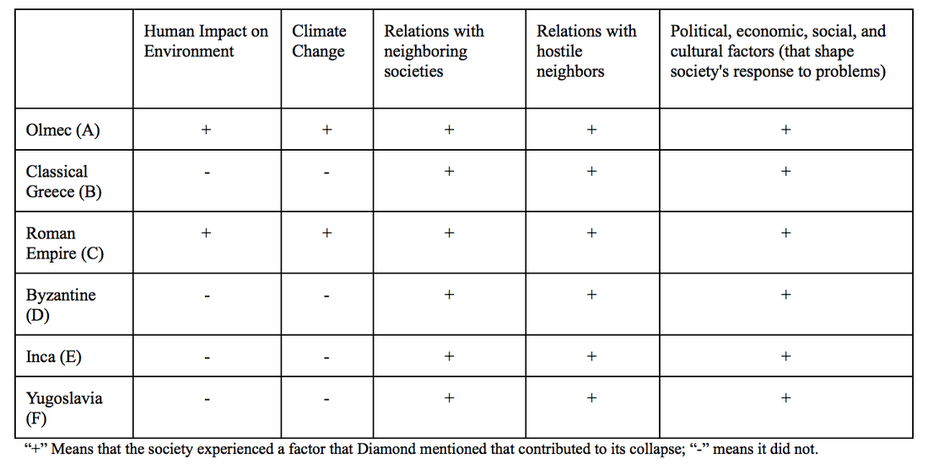 
​
This model demonstrates which factors in Diamond’s five-point framework were present and applicable for each society. It must be noted, however, that this model does not examine the extent to which each factor impacts a society’s collapse. All five societies that have been looked at have resulted in having relations with hostile and friendly neighbors, political, economic, social, and cultural factors influence their collapse.

​Societies B, D, E, and F demonstrated that human impact on the environment and climate change did not play a direct role in contributing to the collapse of those societies. Societies A and C displayed evidence of all five points contributing to their collapse.

In examining these six societies in relation to Diamond’s framework, we have found that the framework explains collapse in a manner that takes into account a society’s overall complexity. Diamond’s model provides an unbiased view of the factors that influence societal collapse, and their effect on other aspects of a society (i.e. political, social and economic structures). The framework is able to explain the collapse of the past societies we examined (such as the Olmec and the Roman Empire) relatively well.

​Diamond’s framework, however, does not specify other variables, such as a specific a time frame (when looking at the relationship between the factors mentioned in Diamond’s model and collapse, for example) and the influence of other factors such as disease or political and social issues (i.e. political corruption or famine and poverty). In addition, the framework’s overemphasis on environmental factors may have limited the overall applicability of this model. Due to the complex nature of collapse, it is not viable to have one model that can incorporate every variable involved in the collapse of a society. In spite of these limitations, Diamond’s framework continues to be one that provides insight into societal collapse, and the great impact that certain factors can have on a society and the relation and influence that these factors have upon one another (relations with friendly and hostile neighbors, for example).