Does diamonds framework apply to the byzantine empire?​ 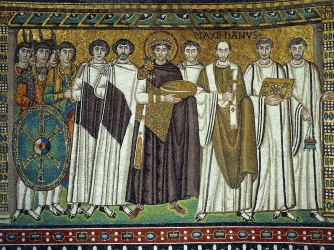 Justinian, the first ruler By: History.com
The Byzantine Empire, also called Byzantium, is known to be one of the longest lasting empire in our history, its reign lasted from 330 A.D to 1453 A.D.The people of that time were not thought of as
Byzantines but as Romans who lived a Roman lifestyle. Byzantine
had been started and ruled by an emperor without any formal constitution. It slowly formed a similar establishment of late Roman institutions (The Byzantine Empire: History & Collapse).Byzantine
was the eastern half of the Roman Empire, based at Constantinople, modern-day Istanbul, that continued on after the western half of
the Roman Empire collapsed and became the surviving safe spot
​for those who had left the western empire(Owen,Jarus). Each one of his frameworks applies during a different time frame in the Byzantine reign, this research focuses on the last major events that took place from 1204 to 1453 A.D.

One of Diamond’s framework is the human impact on the environment. In the reign of the Byzantine Empire, humans did not affect the environment in ways that affected its agriculture but throughout the years, the byzantine was conquered and fought over by many neighboring societies who claimed the land. By doing so, each society impacted the culture of the people and took over the land rather than changing the actual demographic of the land itself. In the middle ages, the original ruler of Constantine who refounded Byzantine after the collapse of the west chose the land not based off the richness of the land, but because he was inspired by God. According to a writer named Sozomen who lived in the fifth century A.D, leaders and priests owned most the land even with high taxation and throughout time the land was taken back and conquered again. (Owen,Jarus).

As with the impact of humans on the environment, climate change had occurred at some point in the Byzantine time. However researchers believe the Late Antique Little Ice Age began around 535 AD.  There was also a drop in temperature following three volcanic eruptions, in 536, 540 and 547 AD. These climate changes occurred about 914 years prior to the actual collapse. Rather than a collapse, the Byzantine people demonstrated resilience during these shifts. (Swan,Russ).

​Although the role of climate change and the effect of humans on the environment towards the collapse of the Byzantine Empire is unclear, the relationships with neighboring societies played a big role. When forming alliances, the Byzantine had an inner struggle with the definition of who consists of a foreigner. After the Byzantine took over southeastern Europe, southwestern Asia, and the northeast corner of Africa after the collapse of the Western Roman Empire, the people of that time were not thought of as Byzantines but as Romans who lived a Roman lifestyle.(The Byzantine Empire: History & Collapse).

In the book Byzantium and the Other: Relations and Exchanges, Laiou discusses the institutional mechanisms of integration approaches and assimilation the Byzantine Empire utilised by the Byzantine state and church. These include means such as Christian conversion, Greek language, imperial service, and intermarriage. Laiou also looks at the role of the judicial system as a mechanism for integration (Parker,Scott).

Does Diamonds framework apply to the byzantine?

Diamonds five point frame work applies to the Byzantine Empire overall ,however, due to the large time frame of the Byzantine Empire, determining whether or not Diamonds five point framework applied directly to the collapse of the society became complicated. During this period, the framework does not apply in regards to human impact on the internment and climate change.
Guillaume Berggren.1886.http://creativecommons.org/publicdomain/zero/1.0/