DOES DIAMOND'S FRAMEWORK APPLY TO THE ROMAN EMPIRE?

The Roman Empire (31 B.C.E. - 476 C.E.) is considered to be one of the most successful and extensive empires of Western civilization with regards to its social and political structures. Ancient Rome conquered and ruled territories in Europe, Northern Africa and the Middle East; by 285 C.E., however, the empire had grown so large that it was becoming difficult to rule (in terms of protection and keeping invasions at bay).

Regarding the Roman Empire, there is no single cause of collapse that has been agreed upon. It is, however, believed that environmental degradation (i.e. its effects on social, political and economic aspects of the society) and the invasion of barbarian tribes greatly influenced the Ancient Rome’s vulnerability to collapse [1].

Deforestation
According to Sing C. Chew, author of The Recurring Dark Ages: Ecological Stress, Climate Change, and System (2006), the Roman Empire would practice deforestation because of their great demand for wood. Wood was used among their army and navy for defensive and protective purposes, as well as for agriculture and urbanization. During the period of the Roman Empire, approximately two and a half million trees were cut for building and manufacturing purposes (Chew, 146). In World Ecological Degradation: Accumulation, Urbanization and Deforestation, 3000 B.C.-A.D. 2000 (2001), Chew explains that the combination between the practice of deforestation and their mountainous landscape is what influenced Ancient Rome’s susceptibility to soil erosion and exhaustion.
​Siltation and Soil Erosion
Both siltation and soil erosion caused the amount of salt in irrigation water to increase, which would clog ports and canals, and negatively affect agricultural activity and the transportation of goods (Chew, 95). Chuck Burr, author of Culturequake: The Restoration Revolution (2009), explains the impact that siltation had on the Roman Empire, “The Port of Paestum in Southern Italy silted up completely, and Ravenna lost all access to the sea. Ostia, the port of Rome, only survived as a port because new docks were built.” As a result of this, it’s possible that the food shortages that Ancient Rome experienced were also caused by their difficulty or inability to access certain harbors (Burr, 92). 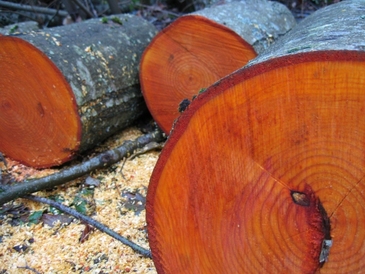 Ulf Buntgen, a researcher at the Swiss Federal Research Institute, led a research expedition that examined the tree rings of various types of trees (i.e. oak trees, stone pine trees), and discovered that the Roman Empire experienced great fluctuations in climate and
​in average levels of precipitation. The tree ring data indicates that the Romans experienced a favorable climate until approximately 550 A.D.; after this period, conditions became very cool and dry until approximately 700 A.D., where conditions became better (Lubick). Buntgen emphasizes the implications that this data has on the  social, political and economic problems that the Roman Empire faced.
​The climate change that Ancient Rome experienced correlates with the barbarian tribe invasions of Ancient Rome during the Migration Period, and he explains that climate change made the society vulnerable to foreign attacks. Buntgen, however, also stresses that climate change influenced other factors of collapse, such as the spread of disease and food shortages (a cooler climate made it more difficult to produce crops such as wheat, for example), which also likely influenced the Migration Period of Rome (Buntgen, et al). ​

Walter Goffart explains in Rome, Constantinople, and the Barbarians (1981) the conflict and hostility in the relationship between the Roman Empire and the barbarians. Barbarian tribes would constantly surround and attempt to invade the Empire, and as a result of this, protection of the borders was of great importance to the Roman Empire. The need for constant protection of Roman borders, however, produced a number of concerns and conflict between citizens and the government. The Roman government had to ensure that a balance was met between the taxing of citizens and the amount of protection that Rome could afford to provide.

​Despite these stresses on the empire (along with other stresses such as deforestation and food shortages), the Romans were relatively successful in fending off attempts of migration and attacks from foreign tribes until approximately 376 A.D. During this period, the Goths entered the empire, which then allowed other barbarian tribes (such as the Vandals and Suevi) to migrate into Rome, as well. As a result of these constant migrations, Rome experienced riots and rebellions ignited by barbarian tribes. Over the course of the next half century, Rome experienced a decrease in overall security due to barbarian invasions, as well as a loss of Roman territory (Iball). 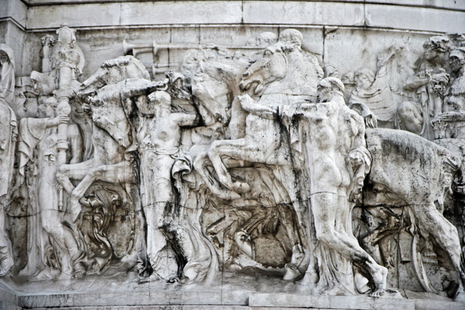 The societies that Ancient Rome conquered were considered to be their allies; this includes cities and colonies in Greece, Spain and the Italian peninsula (Struck).
​
The Socii, a cluster of tribes and cities found in the Italian peninsula, had friendly relations with Ancient Rome, and both offered the other military support and protection; this alliance, however, had some ups and downs (Lavan, 37). According to Matthew Dillon and Lynda Garland, authors of Ancient Rome:
​A Sourcebook (2005), it was the Roman Empire’s
​refusal to grant the Socii with Roman citizenship and the benefits accompanying citizenship that caused the Social War in 91 B.C. Although the Socii were defeated, Rome granted them concessions— a law called Lex Julia was passed which granted Roman citizenship and rights to the Latin and non-Latin allies that hadn’t rebelled.

For the Romans, the appropriate response to environmental damage was not always clear. Forests, for example, were considered to be an obstacle for military and agricultural use, and as a result of this belief, Rome practiced high rates of deforestation. It wasn’t until the near-decline of the empire that Rome began to decrease their practice of deforestation and attempt reforestation—this, however, was not enough.

​As levels of deforestation increased within the Roman Empire, the spread of diseases such as malaria did, as well. The Romans did not effectively deal with this problem; their solution to the spread of malaria within the city was to leave the city during the summer months (when malaria would reach its peak), and build villages and cities on areas of higher altitude which would provide some protection from mosquitos. The Roman’s response to this aspect of environmental problems was incredibly ineffective; moving to areas of higher altitude did not impede the spread of malaria. Along with this, only the elite and rich among the Romans could afford to move to the villas on higher grounds.

DOES DIAMOND'S FRAMEWORK APPLY TO THE ROMAN EMPIRE?

Diamond’s overall model, however, seems to overlook the huge impact that social, political and economic problems has on a society. The Roman Empire, along with experiencing environmental degradation, also dealt with political corruption and social issues, such as slavery, that were important to its collapse. We recognize that many of these issues were a result of environmental problems and were influenced by factors mentioned in Diamond’s framework, but the complexity of societal collapse cannot be completely described through environmental issues and the impact they have on other issues within a society. ​
​Diamond’s five-point framework applies to the collapse of the Roman Empire relatively well. The points mentioned in his model were all prevalent among Ancient Rome, and nearly each point influenced another factor that was important in Rome’s collapse. For example, the first point, environmental damage, consists of deforestation and soil erosion; both these factors influenced agricultural productivity and means of trade, which, as a result, influenced the problem of food shortages-- essentially acting upon a domino effect.
Photos used under Creative Commons from (vincent desjardins), James St. John,  Stephanie Abdul, Lawrence Murray, piet theisohn